At the start of 2019, WeWork was on top of the world. It was valued at nearly $47 billion and crowned one of the fastest growing, most valuable startups in recent history. It’s founder and CEO, Adam Neumann, was soaring as well, preparing to take his co-working empire public, which would make him a billionaire several times over. The company was growing at a historically rapid pace, doubling over the last year to over half a million members renting desks at WeWork locations in 111 cities globally. Revenues were compounding as well, on track to surpass $3 billion at the end of the year.

Then, in September 2019, it all came crashing down.

In the span of a mere few weeks, the company scrapped the plans for its IPO, pushed out Neumann as CEO and took a rescue package from investor Softbank at a fraction of their previous valuation. The company recently announced mass layoffs and its board is scrambling to right this ship, which so suddenly and so violently lurched off course.

How did things go so wrong?

While you cannot ignore the inherent risks of WeWork’s business model and cash-devouring growth strategy, I believe that psychology is at the root of this company’s fall -- specifically, the personality of its CEO and how his natural strengths were allowed to run wild and unrestrained until they transformed into glaring weaknesses. WeWork’s epic plunge is a cautionary tale for all investors, employees, and leaders of companies who allow entrepreneurial hype and cult-like mythology squeeze out the truth, and gives us a fantastic case study for identifying stronger, more durable leadership teams that will avoid a similar fate.

My company, Crystal , builds software that predicts anyone’s personality. Our AI can analyze text online (e.g. a LinkedIn profile) and accurately identify someone’s behaviors, motivations and communication style. There are 16 core personality types in the model, and each one brings unique strengths and blindspots to the table. While no personality type is better or worse than another, each type has traits that are well- or poorly-suited for specific situations. In the right context, someone’s biggest strength can become their Achilles' heel.

Using Crystal, I analyzed Neumann’s LinkedIn profile, and our AI identified him as the Influencer personality: 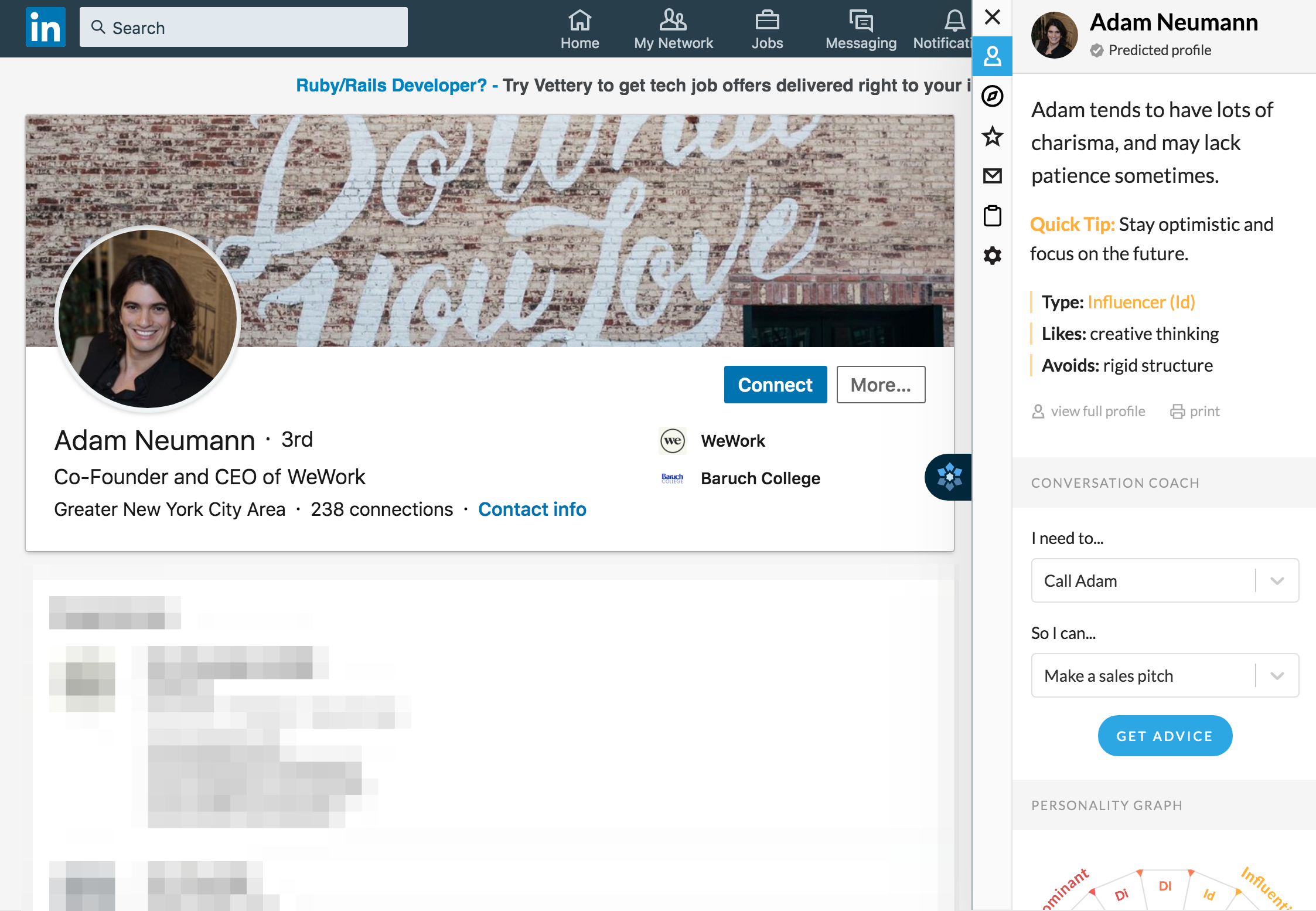 According to Crystal, as an Influencer , Neumann “tends to have lots of charisma and may lack patience sometimes.”

He harnessed the natural strengths of his personality to go from a 3-time failed entrepreneur to one of the most successful startup executives in the world.

The strengths that fueled his rise

Influencer personality types like Neumann are among the most common for successful startup founders. This is because so many of their natural strengths are critical in the early days of getting a venture off the ground. As an Influencer, his core strengths likely include:

Neumann possesses an extreme version of this particular set of strengths, and they enabled him to accomplish herculean feats:

Neumann is a fundraising machine, having brought in a total of nearly $13 billion at a whopping $47 billion valuation from top tier investors such as SoftBank’s Vision Fund.

Perhaps Neuman’s most important quality, and a hallmark of those with his Influencer personality type, is crafting a bold vision and selling a story that painted his business model not as a mere office subletter, but as a global enterprise on a mission to “elevate the world’s consciousness.” Neumann’s natural charm and ability to persuade others to buy into his vision was key for the growth of WeWork.

Influencer personality types are deeply motivated and energized by fostering relationships with others. Indeed, Neumann went from a relatively unknown figure to, within a decade, holding court with the likes of Jamie Dimon, the chief executive of J.P. Morgan, who became a trusted confidant and investor .

The blindspots that accelerated his fall

To be sure, an entrepreneur who possesses these Influencer strengths can be tremendously successful, and for a long time, Neumann was. However, just like every other personality type, Influencers have deep blindspots that if left unchecked, can become immensely destructive.

According to Crystal, Neumann’s most prevalent blindspots as an Influencer type likely include:

In Neumann’s case, these blindspots were so extreme, and left so unchecked, that WeWork spun out of control with no other strong personalities to balance things out. Consider the most damning missteps:

Going after one outlandish idea after another, including starting a $40k per year preschool

Perhaps the most dangerous blindspot of an Influencer personality type is the inability to focus. Neumann chased new opportunities relentlessly, splitting his focus and resources among too many half-baked ideas. WeWork spent $200 million to purchase Meetup.com, and launched a preschool, WeGrow, with a staggering $40k/year tuition rate. Due to such staggering high expenses, the company’s losses ballooned to $1.9 billion.

Neumann has noted that he wants to live forever , said that if he were ever to run for public office, it would be for “president of the world,” and finally, he stated that he wants to be the first person to accumulate $1 trillion in wealth. These unrealistically ambitious ideas that aren’t rooted in reality can get in the way of an Influencer like Neumann staying grounded and focused.

Using his persuasive skills to coerce others, such as in attempting to push NASDAQ to ban meat

Influencer types can be incredibly persuasive. This helped Neumann haul in massive fundraises for WeWork, but it also manifested itself in less productive ways. For example, in inciting a bidding war for which stock exchange would list the We Company, Neumann demanded that the exchanges eliminate all meat from their facility cafeterias, a clear overreach.

Neumann and his wife (also a co-founder of WeWork) were known to make brash, impulsive decisions. In one instance, he acquiesced to his wife’s demand that an employee she met should be immediately terminated because she “didn’t like their energy.” Operating on strong instinct and gut feeling is a classic part of the Influencer personality type, and left unchecked, it can lead to potentially poor, ill-informed decisions.

Being overly focused on pleasing people

As the company grew, its spending habits did too. WeWork provided employees with regular access to expensive alcohol, which Neumann believed helped bring people together, spent tons on lavish parties, and even purchased a $60 million private jet in 2018. When the company needed to cut spending in 2016, nearly 7% of employees were let go; the other employees were told about this in a company-wide meeting that ended with tequila shots and a private jam session with Run-DMC.

While Influencer types like Neumann are known to create a casual, unstructured environment, in extreme cases it can go overboard. He was known to host spiritual think sessions in his office, had an in-office jacuzzi and while the IPO process was falling apart, he was apparently half-way across the world, surfing in the Maldives.

Overlooking risk, especially with the financials, which led to near bankruptcy

Neumann’s great passion for out-of-the-box, bold thinking led to some big ideas and a vision that grew WeWork into a powerhouse. However, a natural blindspot of his personality type is to sometimes overlook the risks of a situation. In the case of WeWork’s financial planning, when the IPO fell apart, WeWork had just a few months of cash in the bank to operate the business, which ultimately led to the firesale rescue by SoftBank at a deeply discounted valuation.

Could this have been prevented?

Without a doubt, yes.

With a bit of focus, self-awareness, and outside help, Influencers can be inspiring leaders, who have the ability to dream up innovative change and see it through to fruition. When someone has such extreme personality traits, it’s critical to balance them out with someone that has nearly opposite traits. In the case of Neumann, WeWork may have considered stacking the executive team with more personalities on the opposite side of the map, such as Skeptics and Analysts : 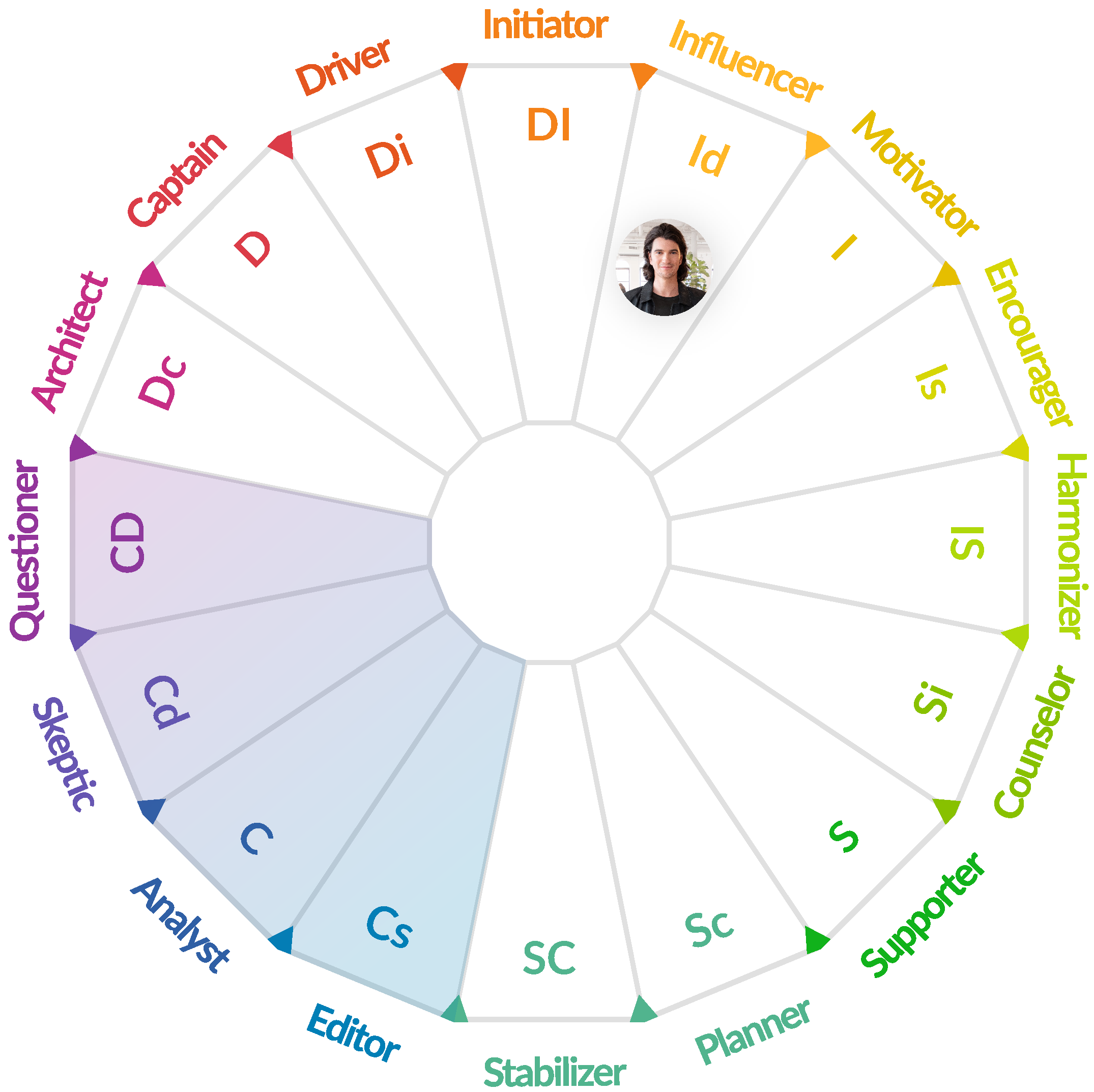 This is a prime example of why understanding personality is so crucial. It’s important to recognize the natural strengths of a CEO’s personality, and have a clear plan to compensate for their blindspots. In the case of Adam Neumann at WeWork, he’ll walk away with a cool $1.7 billion and a chance to try again with another company. Perhaps the next time, he’ll empower a business partner with the opposite personality to balance him out.

Want to learn about your personality
and what comes naturally to you?

Leadership Personality Traits: What Are the Traits of a Good Leader?
personality | Workplace

What Are the Best Jobs for Introverts? (20 Good Careers for Shy People)
coaching and leadership

What is DISC Training: Activities for Each Personality & Management Style
hiring

How Accurate Are Personality Tests & Are They Reliable for Employment?